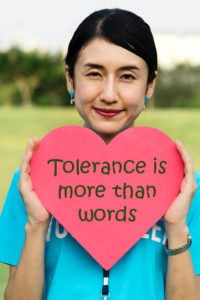 If you watch the news, tolerance seems to be a lost art. College kids shout down speakers. Mobs throw chairs through windows. Hordes of hooligans loot stores. It’s not that we don’t try. The Kindness Movement is more popular than ever. TeachingTolerance.org even uses Black Lives Matter as a model for tolerance education. Martin Luther King Day is always chockful of admonitions against prejudice and intolerance.

But how do you teach it in the confines of a classroom? Another lesson plan? A movie about Mahatma Gandhi? Quotes like this from Helen Keller:

The highest result of education is tolerance.

These have all been done and by many measures, America and the world are more intolerant than ever. So what do you do in your classroom to get this important attitude across? Here are some fresh ideas that you may not have tried:

Words don’t stem the tide of intolerance. No matter how many times we say, “See the other’s perspective,” or “Be kind,” these words are meaningless to a dedicated zealot who feels the end justifies the means. Sometimes, the best way is simply to model tolerance. In writing, this is a powerful storytelling device called “show don’t tell”. It means instead of talking about tolerance, be tolerant. When a student gets angry over a grade, explain where they fell short or how to improve a grade.

Admittedly, in the current social media world, words are today’s doing. People join hashtag campaigns like #Nevergiveup or #Bringhomeourgirls. While these may raise public awareness, they don’t deliver the tolerance necessary to change the outcome. Don’t hashtag a sentiment; find an action for the words.

Defend yourself, but kindly

When a child is attacked, it’s instinct to counterpunch but that isn’t the most effective strategy. Usually, intolerant behavior is rooted in either 1) mimicking others the student respects,  or 2) having a lack of knowledge. On the second grade playground, kids throw insults back and forth but as they grow up, they learn to show respect even to an attacker by asking questions, starting a conversation, and digging deeper into the cause. 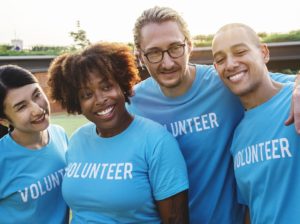 No matter how well-intentioned it is, the ends rarely justify the means. Always push back on intolerance. The ugly truth is that little intolerances grow into big ones. When you let minor stuff get by, you provide precedence for major stuff. Don’t do that. Stop it — kindly — before that action becomes habit.

There is more than one right answer.

Little in life has one right answer. Even 3+3 is 6 if you’re talking about Base 10 or 10 if you’re in Base 6. Don’t assume your answer is the only answer and don’t assume everyone agrees with you. In the face of disagreement, ask questions that start a conversation.

Lecturing is conflated with pontificating. Don’t do that. Instead, have a discussion. Because conversations are more relevant when supported by evidence, include the facts that support your lesson plan’s essential questions and big ideas. Welcome what students say to either support or contradict your points. In the end, students feel like they reach the right conclusions on their own and everyone feels valued for their contributions.

Every story has two sides.

Every one of them. No matter how obvious you believe something is, there’s someone who believes the opposite. Accept this other side even while asking that students support it with facts and evidence.

Always respect students. They aren’t empty vessels waiting to be filled. They are learners ready to evolve their thinking. They all have experiences, based on their own background, that you don’t. These will affect the way they learn. Accept that. If you don’t, they won’t respect you either.

By the way, bullying and cyberbullying have no place in a tolerant ecosystem. Expunge them. If it happens, address it immediately. Tolerance isn’t allowing these sorts of destructive actions to continue. It’s caring enough for the (cyber)bully to find out why he acts this way and reach out to help him fix it.

Instead of trying to convince a child their view is wrong — using kind, non-judgmental words — look through their eyes. Why are they saying this? It’s unlikely they’re a horrible person so is it learned behavior? Or part of their culture? Many of our actions are based on our upbringing and accepted norms in our culture. If these are different than someone else’s, it doesn’t make them right or wrong. Just different. In my classroom, that’s a learning opportunity.

Review your school climate for tolerance

The conclusion of the CSEEE and NCLC’s White Paper, The School Climate Challenge, will not surprise most teachers, administrators, or parents:

…a safe and supportive school environment, in which students have positive social relationships and are respected, engaged in their work and feel competent, matters.

Assume students are innocent until proven guilty. Assume their perceived intolerance is not about attitude but lack of understanding. For example, many label recent politically-charged Supreme Court decisions as intolerant but when you dig into the facts behind it, you find closely-held beliefs on both sides to this story. They’re different perspectives that give you two sides to the story. Whether you agree or not with one side, being tolerant means accepting everyone doesn’t agree with you — and that’s a good thing.

In reviewing your school tolerance climate, start by establishing an accepted definition of the terms “school climate” and “tolerance”. That done, assess school climate in the cold eye of reality using one of the many procedures available (like this one from the National Center for Community Schools). The final step is to act on the results.

This is not an easy topic. It is fraught with danger, hurt feelings, angry retorts, and not at all for the faint of heart. Still, the repercussions of intolerance make the effort worth it. I’d love if you would share how you address intolerance in your school.

More on teaching tolerance in schools

Jacqui Murray has been teaching K-18 technology for 30 years. She is the editor/author of over a hundred tech ed resources including a K-12 technology curriculum, K-8 keyboard curriculum, K-8 Digital Citizenship curriculum. She is an adjunct professor in tech ed, Master Teacher, webmaster for four blogs, an Amazon Vine Voice, CSTA presentation reviewer, freelance journalist on tech ed topics, a weekly contributor to TeachHUB, and author of the tech thrillers To Hunt a Sub and Twenty-four Days. You can find her resources at Structured Learning.

Posted under administration,Education reform,Teaching and tagged with kindness, SEL
Comments (0)