10 Myths about Teaching with Tech 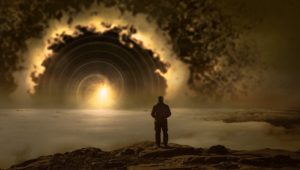 I’ve been teaching technology for over fifteen years. While student familiarity with this tool has improved, one thing that never varies is the myths surrounding teaching with it. It’s a constant struggle with parents and colleagues who have far more enthusiasm regarding this subject than expertise. Just when I think I’ve got everyone coloring between the lines, things change and I have to get a different paintbrush.

Here are ten of the most common face-palming, head-slapping myths that I have to correct:

Kids are digital natives. They get it.

Let’s look at that term, “digital native”. Techopedia defines it as:

a person born or brought up during the age of digital technology and therefore familiar with computers and the Internet from an early age.

I agree about the familiarity. When these “digital natives” show up in my classroom, they have played with iPads and their parents’ smartphones enough to know how to swipe, tap, squeeze, and shake, but they know none of the nuances required to morph the device from a toy to a productivity tool. This is contrary to popular belief — that being raised with iPads means they understand all about them.

To be fair, kids who use technology regularly at home do have both a baseline set of skills and a fearless enthusiasm for anything with a screen and a power button. We adults envy that confidence, so unlike our abject fear that simply touching the device wrong will break it.

But what kids possess is bravado, not knowledge. Knowledge must be taught.

It’s important to remember that lots of kids aren’t raised with technology. The New York Post reported in 2018 that as many as 5 million schoolage children have no Internet access. The reasons vary, everything from their parents don’t believe in it, can’t afford it, don’t trust it, or have no way to connect to the Internet, but the result is the same: No technology for kids considered to be the “digital native” generation.

You don’t have to teach keyboarding.

Lots of teachers don’t believe kids need keyboarding classes. They assure colleagues and parents, “They’ll figure it out themselves when they need it.” But that’s not true. Well, they will figure out a method but it won’t be fast or accurate enough to serve their needs. I’ll never forget when the Director of Technology at my school decided kids didn’t need keyboarding lessons until middle school. Within a few short years, bad habits like hunting and pecking, thumbing keys, and eyes on the keyboard became so ingrained they couldn’t meet State and National keyboarding standards (like those required for online tests and Common Core).

Another clever twist on the argument against keyboard training is that audio input will soon take over. If by “soon”, experts mean in a decade, they could be right, but it won’t happen until we figure out how to keep audio output from disturbing the entire class and how to perfect voice recognition to accurately display what is said.

Teach the digital tool and then use it.

Here’s how this works. Many teachers decide, say, a slideshow would be nice to support a lesson they’re teaching. First, they teach kids to use slideshows and then they explain how to use it with a lesson project. Quickly the lesson becomes about learning slideshows rather than the Big Idea and Essential Question. That’s not the goal of technology. It’s supposed to enhance learning, not distract from it.

A better approach is to use tools students are familiar with, that are intuitive to use and within the students’ age range for understanding. Then, students figure it out themselves while completing a project that shares their knowledge.

What they really like is that it’s easy (they too have bought into the myth about digital natives) and adults are intimidated by it. When they can’t immediately figure something out, they become intimidated or lose interest. Or worse, think it’s too hard. It is your responsibility to show tech as an exciting tool for learning. Don’t minimize the joy students will experience conquering something new. Those huzzah moments make learning fun. Students will continue to love tech, just in a more informed way. 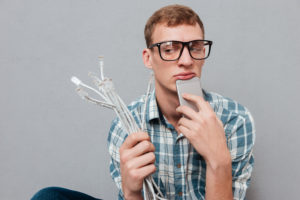 Many teachers think that a certain type of person loves tech and the rest of the world slogs through, at best tolerating it. Math is like that. Only math teachers like formulas and scripts. In fact, using technology well is more about problem-solving than brain power. Those unafraid to engage their brains in critical thinking excel at it. Those who think “it’s just too complicated” — well, it fulfills the prophecy.

Let’s take a quick test. Do you use a smartphone and all of its scintillating apps? Do you click, swipe, squeeze, and drag like a boss? Of course you do. 36% of the world population does. Are you a geek?

Technology will replace me.

No, it won’t, despite the 2009 robot who taught a Tokyo class and Elias, the Finnish primary school robot. Teaching is as much about interacting with students, collaborating, and solving problems as dispensing of knowledge. It will be years before that can be incorporated into a robot or AI (artificial intelligence). Long before that happens, a classroom version of Siri or Google Home will be partnering with teachers to more effectively and efficiently perform everyday tasks, freeing teachers up for the greater rigor of teaching students to think.

Or more. Pick your answer. They’re both right. The best response to this complaint is that technology is a tool for doing your job better. Done right, it automates repetitive tasks and quickly differentiates for student needs. Done poorly, it’s an albatross around the teacher’s neck. In balance, teachers work just as many hours with or without technology but those who embrace technology work smarter.

Someone has to teach me how to use technology.

This myth is often the one that shuts down all conversation. “I would use technology if only someone would show me how.” In fact, technology is as much a personal responsibility of educators as it is the purview of schools and districts. Teachers who want to excel at their job will embrace technology because with it, they reach more students more effectively.

What’s subtly changed over the last decade is that developers realize for their tech tool to be adopted by educators and schools, they must be intuitive, easy to set up, and easy roll out. If they aren’t, there’s another one that is. Moodle is a great example of this. Moodle is hands down, one of the most powerful free LMSs, but it’s complicated to set up, confusing to use, and intimidates most people just by hearing its name. Where it should be the most popular in the extensive LMS field, it owns only a corner. In Moodle’s case, someone does have to teach educators to use it and that holds it back.

I don’t have time.

Technology is considered a layer on top of the usual classroom responsibilities. “I have to teach [fill in this blank with what you do every day] and now I have to teach technology too!” Done right, technology makes teaching faster by automating boring tasks to free up time for the critical goal of student education. For example, grading is a black hole of time-sucking duties. Teachers spend hours grading papers rather than interacting with students, revising lessons, and differentiating for varied student needs. Thanks to tech tools like Google Forms and Flubaroo (and many more), chunks of grading can be automated (like spelling tests and multiple choice), giving teachers more time for the parts of teaching that are more critical.

To be honest, I never thought of this one. As I researched this article, “zombie kids” popped up often as a side-effect of technology in education. It has to do with students glued permanently to their screens, passively watching videos and not interacting with each other. Truthfully, that may be how technology looked decades ago, when it first arrived in the classroom, but not anymore and if that’s how it looks in your school, get it fixed! Done right, technology turns kids from passive learners tied to textbooks and worksheets to active learners engaged with each other.

Did I miss any myths? Share them in comments!

More on teaching with technology

A Day in the Life of a Tech Teacher