How Magnolia ISD ‘leveled the playing field’ for students in math

If you’re evaluating math programs at your school, a good option to consider is ORIGO Education’s Stepping Stones. Here’s one educator’s story about how Stepping Stones made a big difference with his students’ math skills:

Like many U.S. school systems, the Magnolia Independent School District in Texas serves a diverse student population. More than a third of its students come from low-income families, and one out of every eight students is an English language learner. Yet, the district has seen consistent and remarkable success in math achievement across all of its elementary schools since it began using Stepping Stones, a prekindergarten through sixth grade comprehensive math program from ORIGO Education.

Stepping Stones takes a unique approach to teaching young students mathematics that is based on decades of research and has proven to be successful for all types of learners. It relies heavily on visuals and on a deliberate use of language that progresses from the concrete to the abstract, leading to a deeper understanding of key math concepts.

For instance, the materials use a wavy number line to help children understand the concept of rounding. Instead of simply memorizing an abstract rule such as “less than five, round down; five or more, round up,” students can actually visualize what that means. When the teacher “places” a ball on the number 53, students can see that the ball would roll down to the number 50, making this abstract concept easier to grasp.

Stepping Stones also leverages the words that children already know to teach math concepts before moving on to the more abstract language of math. For instance, very young children might not understand what words like “subtract” or “minus” mean, but they do know words that imply subtraction, such as “I lost my toys” or “I ate the cupcakes.” Stepping Stones progresses from this kid-friendly language to the language of materials, such as “take away,” and only when students have a deep understanding of the concept does it introduce the language of math (“subtract”). 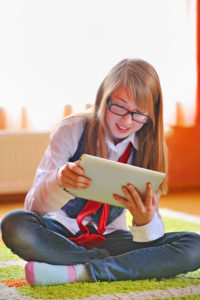 “When I saw Stepping Stones, I knew that’s what I wanted,” she said. “I love the concepts behind it, and how you’re teaching kids strategies and not just memorization.”

In Nichols Sawmill’s first year of using Stepping Stones, “it wasn’t mandatory,” Szako said. “I asked for teacher volunteers for who wanted to try it.” But once those teachers started talking about the program with their colleagues, others wanted to use it as well—and soon it was being used school-wide. “For the last three years, we have used it faithfully and with validity in all of our classrooms,” she said.

A similar pattern of adoption occurred throughout the district. When the eight elementary math coaches met to discuss the programs they were trying in their schools, Szako described the remarkable success her school’s teachers were experiencing with Stepping Stones. “Before that school year even ended, all of the coaches wanted to try it in their own schools,” she said. “We voted hands-down to use it district-wide.”

Since Magnolia ISD began using the program district-wide, the district has seen math test scores rise. In 2015-16, 86 percent of the district’s fifth-grade students scored as proficient in math on the State of Texas Assessments of Academic Readiness (STAAR) exam—up from 75 percent the prior year.

At Nichols Sawmill, which has a higher percent of special-needs students than the district average, 96 percent of fifth graders passed the state exam by the end of last year. “My fifth-grade scores were tops in the district,” Szako said.

Because the program uses visuals and simple, kid-friendly language to help students understand abstract math concepts, English-language learners enjoy great success with it and gain confidence in their abilities. Szako described how one student arrived in the United States near the end of the fourth grade.

“She knew no English and had never been in a formal school setting before,” Szako said. Using Stepping Stones, the school was able to get her up to speed in math very quickly—to the point where she scored as proficient at a fifth-grade level on the state math exam by the end of her second year at the school.

“I owe that to Stepping Stones giving us the tools to go back, connect the math concepts to prior grade levels, and build her skills up,” Szako noted.

When the district first started with the program, many parents were confused, because it was very different from how they had learned math in school. “They called it ‘new math,’” Szako recalled. “We held parent meetings and tried to educate the parents so they would understand why we were teaching math this way. We explained that we’re not teaching the kids tips and tricks; we want them to truly understand math.”

After the first year, she said, “we had parents come to us and say, ‘Why is it that my second grader can do more math than my fifth grader in their head?’ It’s because the second graders had such a strong math foundation from Stepping Stones. Now, our community is seeing that what we are doing works—and they can see that the kids really understand math.”

In fact, she said, “if you walk into the school and ask kids what their favorite subject is, I bet 99 percent of them would say math. And our teachers enjoy teaching math now as well. That wasn’t always the case.”

Typically, school systems will see achievement vary from school to school, especially when some schools in the district serve higher concentrations of challenging student populations than others. But in Magnolia, where all elementary teachers are using the Stepping Stones program, that isn’t the experience.

“Our reading scores had a 23-point spread from campus to campus,” Szako said. “But our math scores only had a nine-point spread from campus to campus. It doesn’t matter which school you go to; you’re receiving the same instruction and using the same resources—and your teachers know how to use those resources effectively. Stepping Stones is closing our achievement gaps. It has put all of our campuses on the same playing field, so that all students have the same opportunity to learn.”

She concluded: “We wanted to increase the mathematical understanding of our students, and we wanted them to love math. We knew that if we did that, our state scores would skyrocket. And that’s exactly what has happened.”

Dennis Pierce is a freelance writer with 20 years of experience covering education and technology. Follow him on Twitter: @denniswpierce.

New from ORIGO Stepping Stones for This Summer