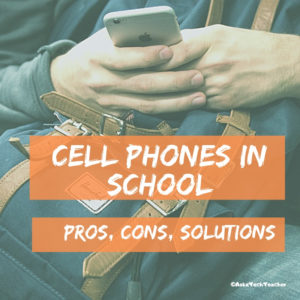 I teach online grad school classes in how to integrate tech into education. One topic I always ask students is how they manage cell phone usage in their classes. Protocols for these mobile devices have little in common today with how they were addressed a decade ago.

In 2009, a National Center for Education Statistics survey  showed that about 90% of schools prohibited cell phones during school hours. Now, in 2019, that’s dropped to about a third.

Schools that do allow cell phone usage struggle with best practices. For example, most students have them but not all students. What do you do about personal devices that circumvent the school security to access the Internet? How do you apply a different set of rules for in-class and outside-of-class?

Before I get into solutions, let’s discuss the pros and cons of using cell phones in class.

In many schools, Internet access is spotty, undependable, and a challenge to manage. More schools than you’d expect still struggle with the robustness of their infrastructure. Too often, school digital devices can’t connect, or can’t connect in the volume required to run a class. Cell phones fix that. I often hear anecdotal stories of how student personal devices are allowed in class to make up this shortfall in the school’s infrastructure.

Another common reason is that cell phones are simply easier to use. When students want to do quick research on a topic, look up a word, run a calculation, or review a concept, they can hop on a cell phone much faster than logging into a Chromebook or laptop. Because mobile devices are faster, it satisfies student curiosity and builds their passion to be lifelong learners.

Third, high school students are preparing for their future. Whether that’s college or career, it will include cell phones. Why not show students the right way to use these devices while they’re still listening?

Fourth, and probably the first reason parents come up with, is that cell phones provide contact in case of emergency. The most visible example of this was the Parkland School Shooting in February, 2019. Students not only called 911 but were able to reassure parents via messaging and phone calls that they were OK. And this works both ways. Parents, too, can reach out to tell their child they’ll be late picking them up or that they forgot a book. Calling or messaging a child on a family cell phone is much faster than going through the school office.

Fifth, students want to use digital tools. Studies show that 88% of teenagers between 13-17 have cell phones (or access to one) and 66% of middle schoolers. They already nimbly use them to facilitate their lives and want to do the same for their learning. Encouraging user-friendly education starts with the tools kids enjoy.

Finally, cell phones have become a small version of a computer be it a laptop, Chromebook, or iPad (especially an iPad). Where they used to be primarily to make phone calls, now they are great for research, fact-checking, sharing, collaborating, quick study sessions, and more. Mobile phones can do pretty much everything a computer can via apps and Internet access. Schools with BYOD (Bring Your Own Device) programs find a noticeable percentage of students bring mobile phones as their device. And why not? There’s very little the teacher would require that they can’t do on a mobile phone.

The most closely-held reason for not allowing cell phones in class is that they open the door to cheating. In fact, according to a survey from Common Sense Media:

…35% of students say they use cell phones to cheat.

Even if the school’s cell phone policy allows use during class but not during tests (as it is with the Department of Education in New York), how do you manage that? Students are experts with thumbing in an answer faster than most adults can blink, and they do it one-handed, below the desk, and when the teacher isn’t looking. It’s like a cookie with a warning. Who’s going to listen?

Another popular reason for avoiding cell phones is they’re distracting. Studies show that students spend 20% of their in-class time texting, emailing, and checking social media. The French government actually banned cell phone use in French schools for grades kindergarten-9th. Many argue that cell phones are no more distracting than the Internet but because the device is so much smaller than even iPads, they’re easier to hide.

Third, cell phones aren’t secure, private, or G-rated. If they aren’t run through the school’s system (which most aren’t), user profiles depend upon the student’s family attitudes and beliefs. To manage those through the school would be daunting. Or worse. No one I’ve talked to has a good solution for that but I’ll be checking comments. I hope you can educate me!

Fourth, students who interact with their phone screens aren’t socializing with classmates. That’s a problem. The school experience isn’t just about cerebral learning. It’s also about developing social skills that help students throughout their life. Good manners, effective communication, and being considerate of others can’t be learned in front of a cell phone.

Fifth — and arguably, the most important — is cyberbullying. Schools with cyberbully problems find they decrease when cell phone usage during school hours is controlled. It’s much easier to cyberbully when the target is somewhere on the Internet rather than standing in front of you. A survey of 500 American teens found that forty-two percent of heavy cellphone users have engaged in negative or inappropriate activity on their phones. A school environment open to cyberbullying is not conducive to learning.

Lastly, there’s the problem of equity. All students don’t have cell phones. How do you handle these children if the lesson plan requires a cell as a backchannel or quick assessment tool?

The problem of cell phones isn’t new. Many schools that tried to ban them are now lifting that ban (like New York City did in 2015) opting instead to allow schools to establish policies that work for their unique student group. If you’re going to allow cell phone usage:

Knowing all of this, how do teachers address cell phone usage in their classrooms? Here are some of the solutions my students (mostly high school teachers in grad school) tried:

Replace “cell phone” with “Internet” and you have an old question already asked and answered. ISTE (the International Society for Technology in Education), the gold standard for technology in education, affirmed long ago that it’s better to teach kids to use the Internet safely than to forbid it. Common Sense Media, one of the most popular online sources for tech-in-ed guidance, says, “Have a plan not a ban.” That makes a lot of sense to me. What do you think?

Jacqui Murray has been teaching K-18 technology for 30 years. She is the editor/author of over a hundred tech ed resources including a K-12 technology curriculum, K-8 keyboard curriculum, K-8 Digital Citizenship curriculum. She is an adjunct professor in tech ed, Master Teacher, webmaster for four blogs, an Amazon Vine Voice, CSTA presentation reviewer, freelance journalist on tech ed topics, contributor to NEA Today and author of two tech thrillers. You can find her resources at Structured Learning.